Guinness is an Irish dry stout that originated in Dublin, Ireland, in 1759. It is one of the most famous alcohol brands worldwide, brewed in almost 50 countries, and available in over 120.

Guinness Draught beer is not really black but rather dark ruby red because of the way the ingredients are prepared. The raw barley is roasted, similar to coffee beans, which gives the Guinness Draught its distinctive color.

Guinness's flavor derives from malted barley and roasted unmalted barley, a relatively modern development, not becoming part of the grist until the mid-20th century.

Although Guinness's palate still features a characteristic "tang", the company has refused to confirm whether this type of blending still occurs. The draught beer's thick, creamy head comes from mixing the beer with nitrogen and carbon dioxide.

This is considered the original Guinness beer blend. You could even say this mix shows the real pride of the Irish having Bass, a beer with British origins, underneath the mighty Guinness. 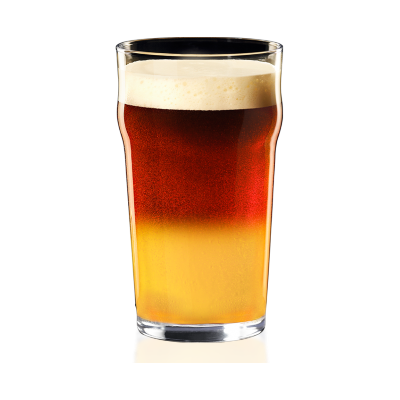 A snakebite is a cocktail drink from the United Kingdom made with equal parts of lager and cider. If a dash of blackcurrant cordial is added, it is known as a "snakebite & black" or a "diesel". Different regional recipes and names exist. Stout may be used instead of lager in the United States and is typically served in a pint glass.

The Black Velvet has been around quite for a while. It was invetened in 1861 at Brooks’s Club in London to honor the passing of Queen Victoria’s husband, Prince Albert. The dark beer added a sad note to the usually festive Champagne. It is supposed to symbolize the black armbands worn by mourners. It was said that "even the champagne should be in mourning." Today, the drink is not exclusive to mourning. The drink is easy to make event at home. Pour some Guinness into a glass, top it with Champagne, and that's all. This is the most common combination, but some choose to skip the Champagne and use hard cider. Both variants are great and it's fun to experiment. The black velvet is an interesting mixed drink that blends ​​Champagne and dark beer in a single glass. One may think this an unlikely combination but it's quite good. The cocktail has been such a success over the years that it encouraged a few companies to bottle similar mixes over the years. Nevertheless, it's rare that these last long on the market because because the cocktail it's such an easy mix that anyone can pull off at home.

An Irish Car Bomb is a cocktail, similar to a boilermaker, made by dropping a bomb shot of Irish cream and whiskey into a glass of stout. The Irish Shot is a 1979 invention that quickly took off in Irish pubs and other bars around the U.S. It was first created by Charles Burke Cronin Oat.

The cocktail name comes from the Black and Tans, who were English paramilitary soldiers accused of some of the worst atrocities against the Irish during the Irish War of Independence in the early 1920s. Their nicknames stem from their uniforms, a mixture of black and khaki. The beauty of the black and tan is that you can enjoy two completely different brews in the same glass. This is the layered beer drink you see in bars across the United States, and it's easy to make at home. This layered beer cocktail made of half stout (usually Guinness) and half pale ale (often Bass) works because the stout is less dense than the ale, so it floats atop the lighter-colored beer, creating a two-tone pint. These two beers make perfect black and tan layers in the glass if they are poured correctly. The two layers remain as you drink, separated. In Ireland, the drink is called a half and half. The term likely originated in England, where consumers have blended different beers since the seventeenth century. The tradition of blending beers can be traced to London during the 1700s when beer blends or three-threads and five-threads were consumed.