Orange peel is the peel of an orange and is usually used to garnish cocktails for the subtle oils in the peel that can accent the flavors of a cocktail. The best way to get one is to cut a coin at least one inch wide and about two inches long into the orange peel.

Orange peel contains many vitamins, including provitamin A, folate, riboflavin, thiamine, vitamin B6, and calcium. Plus, it's rich in plant mixtures called polyphenols, which can help prevent and manage many chronic conditions, such as type 2 diabetes, obesity, and Alzheimer's disease.

Orange peel is also great with 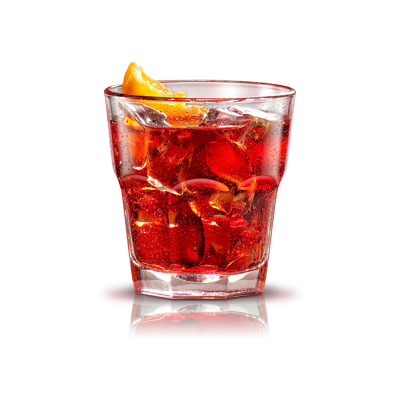 A Negroni is an Italian cocktail, made of one part gin, one part vermouth rosso, and one part Campari, garnished with orange peel. It is considered an aperitivo. Outside of Italy, an orange peel is often used in place of an orange slice. While the drink's origins are unknown, the most widely reported account is that it was first invented in Florence by the dauntless Italian Count Camillo Negroni in the early 20th century.

The old fashioned is a cocktail made by muddling sugar with bitters and water, adding whiskey or bourbon, and garnishing with orange slice and a cocktail cherry. It is traditionally served in an old fashioned glass, which predated the cocktail. Developed during the 19th century (around 1806) and given its name in the 1880s, it is an IBA Official Cocktail.